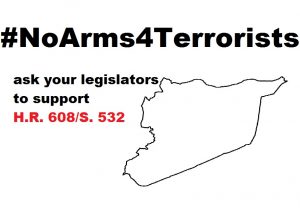 WASHINGTON, March 27, 2017 /PRNewswire-USNewswire/ — Christian Solidarity International (CSI), with the assistance of Global Strategic Communications Group, today announced the launch of No Arms For Terrorists, a campaign in support of the principles and purposes of bi-partisan H.R. 608 and S. 532 “Stop Arming Terrorists Act.”

The Stop Arming Terrorists Act “prohibits the use of federal agency funds to provide covered assistance to: (1) Al Qaeda, Jabhat Fateh al-Sham, the Islamic State of Iraq and the Levant (ISIL), or any individual or group that is affiliated with, associated with, cooperating with, or adherents to such groups; or (2) the government of any country that the Office of the Director of National Intelligence (ODNI) determines has, within the most recent 12 months, provided covered assistance to such a group or individual.”

“No one doubts the complexity of the security challenges facing the United States in the Middle East and worldwide,” said John Eibner, CEO, Christian Solidarity International. “However, No Arms For Terrorists believes that under no circumstances is giving money and weapons to al-Qaeda and other groups the U.S. government knows to be terrorists and their collaborators a legitimate option or a valid use of Americans’ tax dollars.”

“This is a particular problem in Syria, where over the past six years of conflict American tax dollars have been used directly, or indirectly via U.S. allies, to arm jihad terror groups in a bid to overthrow a secular, socially pluralistic ruling elite and replace it with a sharia-based Sunni supremacist one,” continued Eibner. “This has contributed to the ongoing carnage in Syria (and in nearby areas, notably Iraq), particularly against people and communities who do not fit into the terrorists’ ideological program: Alawites, Christians, Druze, Kurds, Shia, Yezidis and moderate Sunni Muslims.  Arming terrorists in Syria and elsewhere contributes to an ongoing genocide of Christians and other religious minorities in the Middle East, promotes violence against women, drives mass migration from Syria to neighboring states and the West, and increases the terrorist threat to America and Europe.”

Rep. Gabbard points out in her introductory statement for SATA: “Under U.S. law it is illegal for any American to provide money or assistance to al-Qaeda, ISIS or other terrorist groups. If you or I gave money, weapons or support to al-Qaeda or ISIS, we would be thrown in jail. Yet the U.S. government has been violating this law for years, quietly supporting allies and partners of al-Qaeda, ISIL, JabhatFateh al Sham, and other terrorist groups with money, weapons, and intelligence support, in their fight to overthrow the Syrian government.”

Sen. Paul declared in his introductory statement: “One of the unintended consequences of nation-building and open-ended intervention is American funds and weapons benefiting those who hate us. This legislation will strengthen our foreign policy, enhance our national security, and safeguard our resources.”

CSI is an international Christian human rights organization, campaigning for religious liberty and human dignity, and assisting victims of religious persecution, victimized children and victims of catastrophe, in accordance with the Universal Declaration of Human Rights.

For more information on No Arms for Terrorists, please visit www.NA4T.org.