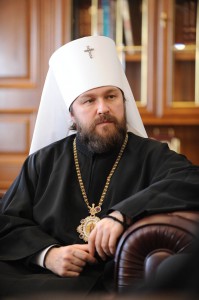 ilarion of Volokolamsk, the bishop responsible for the Russian Orthodox Church’s External Relations Department, spoke extensively about the crisis of anti-Christian religious cleansing in the Middle East in a recent interview.  Christian Solidarity International urges American church leaders to speak with such courage and knowledge about the persecution of Christians in that turbulent region.  Excerpts from the interview are below.  Read the full text at https://mospat.ru/en/2014/04/29/news101927/.

The Syria Crisis:
[In Syria,] various armed bands are at work, systematically eliminating Christians and people of other religious communities.

According to the available data, over one thousand Christians have been killed and about one hundred Christian churches and monasteries have been damaged. Over 600,000 Christians have had to leave their homes, most of them fleeing to other countries. Quite recently, in March 2014, a group of radicals attacked the town of Kesab in northern Syria, populated by Armenians. Almost all the population had to flee because they remained without sustenance. In late March in Damascus, the Jeramana Christian quarter was shelled again; in Aleppo, a mortar shell hit an Armenian church. We are very much concerned for the future of the Valley of Christians – a region in Syria to which Christians from Homs and other cities occupied by militants have had to move. Recently there have been attempts by militants to attack them. For the time being, the attacks have been repulsed.

Iraq:
In Iraq, for the last ten years the number of Christians has decreased tenfold. While they were about a million and a half before, now fewer than 150 thousand have remained and they live mostly in the part controlled by the Kurds.

Egypt:
…the adherents of Islamic radical parties continue committing attacks. Quite recently, a young woman from among the Coptic Christians, Mary Sameh, was brutally killed during an attack on a church in Cairo.

Pakistan:
In Pakistan, there is a strict law on “blasphemy” in force. This law is often abused to settle personal accounts with Christians notwithstanding the fact that this law provides for death penalty. Besides, there are regular pogroms against Christian quarters and attacks on Christians. On September 22, 2013, in Peshawar, a monstrous act of terror was committed with the death toll of 81 and 145 people injured. A day later, a crowd of radical Muslims sacked a Christian quarter in Lahore.

Libya:
A sorrowful situation has developed after 2011 in Libya. A great part of its small Christian community as it is has had to flee the country. Those who have remained, mostly Egyptian Copts, are subjected to regular attacks, often with lethal end.

Nigeria:
In Nigeria, a considerable number of Christians are perishing at the hands of extremists. The radical group called “Boko Haram” as well as nomadic Muslim tribes make regular attacks on Christian villages, mercilessly killing those they meet on their way. Hardly a week passes without a new report coming to us about the murder of tens and even hundreds of Christians in the country. According to the official statistics alone, 1,200 Christians were killed in 2013 in Nigeria.

Somalia:
In Somalia, the radical Islamic group called “Ash-Shabaab” has declared an open war on Christians. Recently in the city of Barawa, the militants of this group beheaded two Christians under the very eyes of their children. This case is far from being the only one in the chain of similar ones. Ash-Shabaab radicals stand behind many anti-Christian acts of terror in neighbouring countries. Islamists are going to get rid of Christians fully and to do it they are ready as much as to commit any crime, as they have openly stated.

The Role of the West:
I would like to notice that the events of the so-call Arab Spring are developing according to the same scenario. In Libya and Egypt and Iraq there were “authoritarian regimes,” as they were categorically assessed in the West. The USA and a number of European countries did all possible to make these governments fall, accounting for it by a desire to build democratic societies after the Western fashion, though every time the change of power was made through force and revolution with no account taken of the historical and religious traditions [or] the relations between local communities. This resulted in the aggravation of internal controversies encouraging extremists and terrorists to flock to these countries from other regions of the world.

I have said on several occasions that Western countries, which have helped Christians in the region for centuries, now have denied them support and almost officially recommended them to leave the region and settle in other countries. Russia has remained the only defender of the Christian presence in the region. Many Christians remaining in “hotbeds” have set their hopes on it.

Blood has been shed for over three years now in Syria. … The actions and statements made by a number of representatives of Western powers contribute not to the healing of wounds inflicted on the country by the armed confrontation but rather to further polarization of the society.

Civilians still perish today as before, churches are destroyed, millions of Syrians wander in search for a refuge. And all this happens not because peace talks were fully fruitless but because the financial and military support for terrorist forces continue coming from outside. I believe it is necessary to continue insisting on an unconditional refusal to support the fundamentalists.

Responding to the Crisis
In my view, to resolve the problem of persecution and discrimination against Christians it is necessary to activate, first, political leverage. In the countries in which religious minorities are persecuted, a clear mechanism of their protection from discrimination and persecution should begin working under control by the world community. The most developed powers should give political or economic support to the authorities in these countries only if they give firm guarantees that their religious minorities will be protected.

Secondly, it is very important that religious leaders should educate their flock for tolerance towards people of other faiths.

We seek to give our persecuted brothers in faith all-round aid. Thus, last summer, with a blessing of His Holiness Patriarch Kirill of Moscow and All Russia, all parishes in Russia raised and sent over 1.3 million US dollars to the Orthodox Church of Antioch. The Imperial Orthodox Palestinian Society, with a blessing of His Holiness Patriarch Kirill, is engaged in collecting and sending humanitarian cargos to be distributed in Syria both to Christians and Muslims. As many as nine humanitarian aid shipments were already sent to Damascus, with a tenth one underway.

I hope that an increasing number of Christian churches and traditional religious communities will be involved in this important mission. It is only together that we can save our brothers and sisters from violence in the old blessed lands where the very term “Christian” originated.