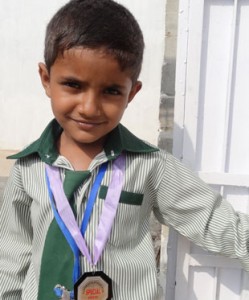 One of the students at a CSI-supported Christian school in Pakistan.

In Pakistan, Christians are effectively second-class citizens, and face church bombings, mob attacks, forced marriages to Muslims, and accusations of “blasphemy” against Islam – a “crime” that carries the death penalty in Pakistan. Christians here are a tiny minority, and suffer daily violence from Muslim extremists and an unsympathetic government.

In Peshawar, Pakistan, CSI employs local medical staff to care for the victims of the September 2013 suicide attack on All Saints Anglican Church, in which over 100 people were killed. CSI also brings food aid to the survivors.

Elsewhere in Pakistan, CSI has sponsored the building of a Christian school in a slum area, where impoverished Christian children can receive an education and contribute to a more hopeful future for their war-torn country.

YOUR GIFT WILL PROVIDE PAKISTANI CHRISTIANS WITH:

–        A chance for poor Christian children to go to school 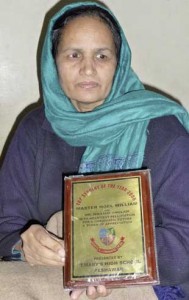 Fehmida holds one of the awards her medical student earned before he was killed in a massacre at their church.

Fehmida was one of 600 people gathered for a picnic in the courtyard of All Saints Anglican Church in Peshawar Pakistan on September 22, 2013, when the Taliban attacked. Two suicide bombers detonated their explosive vests in the midst of the crowd. 126 people were killed.

Among the dead were Fehmida’s husband, son and daughter. Both of her children had been studying medicine; her son, Noel, had nearly completed his studies. When the CSI team visited her, Fehmida showed them some of the paintings he had made: landscapes, winter scenes from Paris, a sailboat in sunset, the hand of Christ stretching down into the darkness to rescue the lost.

Fehmida herself suffered a severe leg wound in the attack, and is now in long-term care. Nearly six months after the attack, she still could barely stand up by herself.

“It says in the Bible that we must suffer for our faith,” Fehmida says quietly.

Fehmida, 50, had been an English teacher at a Christian school. Many of her students were wounded in the attack. The walls of her room are lined with get well cards from her students and colleagues. One of them reads, “Pain strengthens the courage. You cannot be brave if only wonderful things happen to you. May Jesus Christ heal all your wounds and give you a courageous heart and new hope.”

Fehmida is one of the many victims of the September 22, 2013 church bombing in Peshawar receiving medical care and financial support through CSI’s Pakistan program.