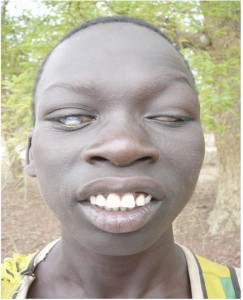 WASHINGTON, Sept. 17 /PRNewswire-USNewswire/ — The torture that blinded 14-year-old Ker Aleu Deng failed to kill his optimism and craving to learn. Enslaved by jihadi militiamen during Sudan‘s North-South civil war (1983-2005), Ker was hung upside down from a tree by his master, Zacharia Salih, who then rubbed chili peppers into his eyes. The master’s motive was to prevent the boy from helping his abused mother – Zacharia’s sex slave – escape from captivity. With the assistance of CSI, Ker has now started to memorize English words and is eager to receive a formal education.

Slaves other than Ker also suffered serious eye injuries as a result of physical abuse. Among them were:

Akuot Anei Wol: 25-years-old: I lost my sight in my eye soon after I was captured. I was still just a girl then. My master’s wife was called Howah. She made me grind grain and clean the house. One day, she was angry and accused me of failing to wash the dishes and sweep the floor properly. Howah grabbed a horse whip and struck me in the face. It hit me in the eye. I lost sight immediately. Howah said: “I’ll blind your other eye if you don’t work.

Achut Ngong Akook: 33-years-old. My master, Ibed, was angry because one of his cows got lost while I was looking after his herd. He thrashed me with a camel whip. One blow struck my eye. I could see immediately afterwards, but everything looked red. Within two years my vision gradually disappeared..

All of the 312 liberated slaves were either abducted during the North-South civil war, or were the offspring of captured female Southern Sudanese slaves. CSI facilitated their liberation and repatriation to their South Sudanese homeland.

The eradication of slavery in Sudan was placed on the agenda of U.S. foreign policy by Susan Rice when she came face to face with freed slaves in Sudan in November 2000.(1)  President G.W. Bush put it at the center of his Sudan peace initiative at the beginning of his first term in office.(2) Yet, despite the Comprehensive Peace Agreement of 2005, slavery persists in Sudan. According to a leading member of the Sudanese Government’s Committee for the Eradication of Slavery in Sudan, James Aguer Alic, approximately 35,000 Southern Sudanese remain enslaved in the North.(3)

The CEO of CSI (USA), Dr. John Eibner, urges President Barack Obama to keep the eradiation of slavery on the agenda of the mini-summit on the current crisis in Sudan on the 24th of this month in New York. “The persistence of slavery and the racial and religious bigotry that underpin this internationally recognized ‘crime against humanity,'” Eibner warns, “blights the prospect of a sustained peace between Northern and Southern Sudan.”