Since your predecessor set in motion his Syrian regime-change policy in the summer of 2011, nearly half a million Syrians have died, 6.3 million have been displaced – including “religiously-cleansed” Christians and other minorities – five million have been driven abroad, and millions more have been reduced to utter destitution.

Two components of this American effort to overthrow the Syrian government have had a catastrophic impact on the people of Syria: the imposition of what President Obama rightly called “unprecedented” economic sanctions, and the arming of anti- democratic Sunni jihadists as proxies.

President Obama’s draconian sanctions regime is one of the primary causes of mass death, impoverishment and migration in Syria. Its impact on children is particularly horrendous. Take, for example, young Fahd, a patient in the Cancer Ward at the Damascus Children’s Hospital. According to the World Health Organization, these sanctions prevent him and many other children from getting effective, life-saving cancer treatment.

The previous administration’s policy of arming Sunni supremacist armies to fight against the Syrian government has had devastating consequences. It has fuelled death, destruction and the explosive growth of jihadism within Syria and around the world.

I draw your attention to just one of many child victims of this violence whom I have met in Syria. Baby George was deprived of a bread-winning father in 2013 when he, along with 44 other Christian civilians, was killed during an assault on their village, Sadad, by the U.S.-backed “moderate” Free Syrian Army and al-Qaeda. Two years later, Sadad was attacked again, this time by the Islamic State – but George and his widowed mother were saved by the last-minute intervention of the Syrian Army and its allies. Baby George’s father killed. 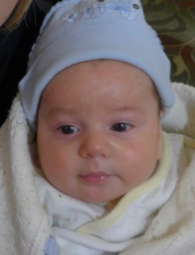 I would encourage you, Mr. President, to act just as swiftly this Easter Season, on behalf of the millions of Syrian victims of economic sanctions and U.S.-backed jihadist armies, as you did in response to the ghastly use of poison gas earlier this month. To effectively address these issues, military action is not required. But the following non- violent measures are a must:

These non-violent, constitutional, cost-effective steps will allow you to achieve positive humanitarian change in Syria while still upholding your increasingly challenged pre-inauguration pledge to end the outgoing administration’s dangerous and counterproductive regime-change policies, focus American resources on rolling back radical Islamist terror, and work with those countries committed to putting an end to jihadism.

For six years the Syrian people – Christians, Muslims, Alawites, Druze, free- thinkers, and others – have been undergoing a cruel and bloody crucifixion. Like Pontius Pilate 2000 years ago, you, Mr. President, now have the power to adhere to either an imperial policy driven by the spirit of death, or the way of the life-enhancing resurrected Lord.