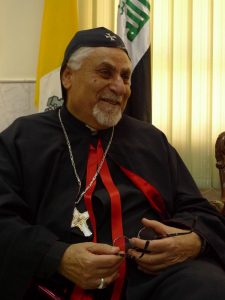 In a recent message, the Syriac Catholic Archbishop of Mosul, Kirkuk and Kurdistan, Yohanna Petrus Moshi, thanked CSI for its support of Iraqi Christians in the face of the Islamic State’s genocide.

While the [Iraqi] central government was almost indifferent of what happened to our people, offering little help to its homeless people, especially when talking about accommodation, livelihoods, health care and education, if it wasn’t for the activities of the church, the support of the Pope himself, the ecclesiastical institutions, the charitable organizations, the Church in Need, Ouvres d’Orient, Caritas, Christian Solidarity International, Salt Foundation and many other organizations from Germany, France, Italy, Britain, the United States and others, we would’ve been subject to death with beasts ravaging through our bodies. We owe them much, and present our deepest appreciation and respect for what they offered.

In June 2014, the Islamic State (ISIS) invaded Iraq’s second-largest city, Mosul, and expelled its Christian population. In August, the Islamic State attacked Christian and Yazidi towns near Mosul, killing and enslaving thousands and forcing hundreds of thousands to flee. Many of these displaced people are still homeless, living in camps and refugee centers in Iraqi Kurdistan. CSI has been providing aid to displaced Christians, Yazidis and others since the beginning of the Islamic State’s reign of terror in Iraq.

In his message, Archbishop Yohanna writes, “Because of the long period of displacement and having no clear vision of the future, our families began to emigrate. …Today, in Kurdistan, their number doesn’t reach 30,000, while this number continues to decreases day after day, until we reach extinction. …A Genocide is taking place.” The Archbishop calls for the liberation of Islamic State-controlled lands, so that the Christians of Iraq can return to their homes and continue to exist as a community.

You can support CSI’s efforts to help the Iraqi Christian community survive by donating today. Thank you for your solidarity in this time of genocide.