For years Christians in Nigeria have been victims of Islamist violence. The terrorist militia Boko Haram and other Islamists want to drive Christians out of their country. At the end of June 2018, the violence reached a new peak: more than 200 people were killed in ten mostly Christian villages. Numerous houses were burned down, entire villages were destroyed.

CSI is on the ground taking care of the victims. Franco Majok (Nigeria Project Manager) was near the site of one of the massacre. He witnessed the need for food and medicine to support these Christians fleeing violence in their villages.

One victim ten-year-old Joseph managed to crawl out of his burning house that was attacked by Boko Haram. The terrorists shot at him, stabbed him with a knife and thought he was dead. He barely survived these horrific injuries. Unfortunately his mother and sister were burned alive. 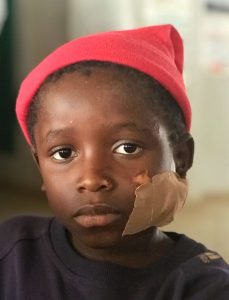 Joseph, 10 years old. His mother and sister were burned alive. He survived with severe burns, gunshot wounds and cuts.

Christian Solidarity International needs your help supporting these victims of Boko Haram. Any help you can provide will provide food, medicine and shelter to these victims.