We are not simply talking about isolated outbreaks of persecution, warned Bishop Michael Nazir-Ali. “This is a systemic issue.”

Thursday, at the conclusion of the U.S. State Department’s 2nd Annual Ministerial to Advance Religious Freedom, Christian Solidarity International (CSI) convened a panel of experts at the National Press Club to highlight the ongoing challenge that Islamic extremism poses to religious freedom – a challenge that was often overlooked at the Ministerial itself.

The panel consisted of Bishop Michael Nazir-Ali, who was formerly Anglican Bishop of both Raiwind, Pakistan, and Rochester, England, and is now president of the Oxford Centre for Training, Research, Advocacy and Dialogue (OXTRAD), and Professor Habib Malik of the Lebanese American University in Byblos, the author of Islamism and the Future of the Christians of the Middle East (Hoover Institution, 2010). Dr. John Eibner of Christian Solidarity International chaired the panel. The three engaged in a wide-ranging discussion with each other and with their audience of ministerial attendees. A video of the panel is available below.

Dr. Eibner introduced the panel, entitled “The Challenge of Islamic Extremism to Religious Freedom in the Post-ISIS World,” by pointing out that Islamic extremism did not end with the apparent territorial defeat of ISIS in Syria last year. Islamic extremists continue to threaten Christians and other non-Muslims in Syria and beyond, most notably in the Easter Sunday attacks in Sri Lanka this year, which killed over 200 people at worship. Islamic extremism is also incarnated in two of the most powerful states in the Middle East, the Wahhabi Kingdom of Saudi Arabia and the Islamic Republic of Iran. Eibner emphasized that a war involving these powers would be catastrophic for religious liberty and other human rights in the region.

In his remarks, Professor Malik identified the principal cause of the Middle East’s “freedom deficit” as “the living tradition of the violent rejection of the other” within the region’s dominant religion, Islam. Under Islamic rule, non-Muslims have been subject to dhimmitude, a system of domination and control backed up by the threat of violent force. Because this tradition of violence persists, “ISIS 1.0 may be over, but ISIS 2.0 and 3.0 are still to come,” Malik predicted.

As an alternative, Malik held up his native Lebanon, the only country in the Middle East with a Christian population that was able to resist dhimmitude and preserve its independence. Because of this, Lebanon, “despite its million problems, miraculously, continues to have the freest society in the Arab world.” This kind of “healthy pluralism,” Malik emphasized, “helps to offset radicalization.”

Bishop Nazir-Ali challenged “some of the myths we’ve heard in the last few days” at the State.

Department’s Ministerial. One of these was the myth that “economic circumstances and poverty create terrorism.” In fact, the bishop noted, most terrorist leaders are very well-educated and well-resourced, and recruit from a population of educated, frustrated young men. Another was that, “In a true Islamic state, there is freedom for all, including Christians.” “I want to be quite blunt,” the bishop said. “There is no historical evidence for this whatsoever anywhere in the world.” Religious freedom can only survive in a pluralistic state with common citizenship, common law, and equality for all.

Both Professor Malik and Bishop Nazir-Ali called for specific actions to help defend and preserve religious freedom against the threat of Islamic extremism. Pointing to Lebanon, Malik argued that “freedom must be preserved where it has stubbornly persisted.” World powers should help Lebanon preserve its free society and try to prevent it from being pulled into a regional war, for example, between Israel and Iran.

Bishop Michael said that individuals and churches should be steadfast in their solidarity with the persecuted, even if that means going against the wishes of western foreign policy establishments. The bishop also said that the international community should not be “selective” in their opposition to extremism. “We are told, ‘Don’t sell facial recognition technology to China,'” he said, echoing a statement made many times at the Ministerial. “Fair enough. What about the sophisticated military technology being sold to Saudi Arabia to bomb the poor people of Yemen?”

The bishop regretted that, in the last fifty years, the broad discussion about the nature of Islamic shari’a law begun by pioneers like Muhammed Iqbal and Muhammad Abduh had been largely closed down under the influence of Saudi-sponsored Wahhabi Islam. “Unless this debate is reopened in the Islamic world,” the bishop said, “we won’t get anywhere.”

“In the end,” the bishop said, “we have to go back to the contribution of Professor Malik’s father.” Charles Malik, the principal author of the Universal Declaration of Human Rights of 1948, insisted that Article 18 of the declaration contain the right “to freedom of religion” and the “freedom to change one’s religion.” “The test of freedom must be Article 18,” the bishop said. “Nothing less.” 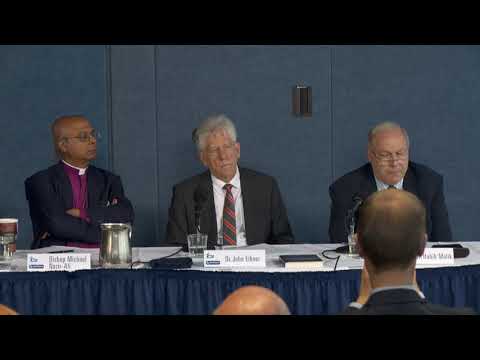