Dr. John Eibner, the CEO of Christian Solidarity International (CSI-USA) delivered a speech at Keston College on November 1, 2014, highlighting the role of the Russian Orthodox Church in bringing support to Middle Eastern Christians threatened with genocide: 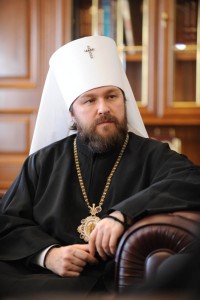 Metropolian Hilarion of Volokolamsk, Chairman of the Patriarchate’s Department for External Church Relations, directs the church’s activity to combat Christophobia in the Middle East.

“I have found in the Middle East that persecuted Christians view the US and its western allies very differently from the hopeful, expectant way that persecuted Christians in the Soviet bloc did. The American human rights agenda, in practice, does not appear to them to address their main concern – survival as Christians in their own ancient homelands. Moreover, many see Washington allied regionally not with democratic forces, but with the very powers that ideologically and financially fuel anti-Christian persecution.

“The once severely persecuted Russian Orthodox Church is  a source of inspiration for Christians in the Middle East as they strive to overcome unprecedented persecution and suffering. This Church’s acts of solidarity with the existentially threatened Christians of the Middle East represent a challenge to the secularized West and its churches. Are the western churches capable of joining the Russian Orthodox Church as a source of such inspiration?”